Miss Lucy Hodges has been awarded the MBE for services to Blind Sailing in The Queen’s New Year Honours list for 2014.

She has been an inspirational sporting figure for many years and amongst numerous awards she was Essex Paralympic Hopeful in 2009 and the Rochford District Sports Personality of the Year in 2010.

Lucy’s dream was always to win the World and International Blind Sailing Championships. Despite being selected for the last 4 World Championships, winning 2 Silvers and 2 Bronze medals, selection wasn’t guaranteed and Lucy fought hard to secure her place for the 2013 event in Japan.

Prior to the event Lucy sailed solo twice along the length of Lake Windermere to raise money for the volunteers who helped support her at the Championships. She went on to achieve her dream of a Gold Medal by skippering her B2 crew and winning an incredible 12 of 15 races.

She has also dedicated a lot of time to ensure as many visually-impaired athletes as possible have had the opportunity to participate in the sport of sailing.

The MBE is deserved recognition for what Lucy has achieved both on and off the water.

In Lucy’s Own Words …

Well, I am still shocked and smiling about both the day I got told I had been awarded MBE and also the investiture itself, and can not thank the people behind me enough.

Blind Sailing from the age of 17 has made me what I am today and helped me achieve many goals — not just in my sailing career but also in my working life.

Looking back so many people have been part of the work I have done with Blind Sailing, from the VI sailors to — most important — the sighted volunteers. When I started with Blind Sailing I would never have imagined how sailing and the people involved would give me confidence to travel, to talk in groups and to take on new challenges, and also the chance to win Gold for Great Britain.

It has been this start in life that has made me want to give this start and the feel of freedom sailing brings to more visually-impaired people around the UK. I take a little idea and feed it in slowly, although I will admit it is a full-time job, it is one I love and enjoy sharing the success with others.

Receiving my MBE on 21 March from the Prince of Wales was so special. I have throughout shared this award with the charity’s volunteers and it was great to share the stories about the people behind me whilst receiving this award, I could never have imagined our success of Japan and how some of our volunteers have been with us for 20 years. I still smile thinking of that moment, and thank my work for the nomination. Something so special for the charity. — 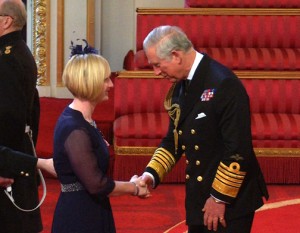 View all posts by Ivan Sheen →